cDebug.au3 includes four main debugging UDFs: _GuiDebug(), _ConsDebug(), _ClipDebug() and _FormatValsForDebug(). They all dump the values of all AutoIt subtypes and expressions, in a structured manner, including nested arrays (up to 3 dimensions) and slices of them, and even DLL structs and maps. It is an alternative to a graphical debugger, offering GUI output.

The format for calling the UDFs has been designed to make coding a call as convenient and fast as possible, minimizing coding effort and the chances of errors: the $name argument is often the same as the variables arguments, enclosed in quote marks.

For DLL structures, if you specify a tag, cDebug checks for differences between it and what it detects. If you only specify a structure variable, it can report the structure it detects, with the values of elements.

It does much more than MsgBox(), ConsoleWrite() and _ArrayDisplay(), in a definitely user-friendly manner, and does its best to avoid hiding your code in SciTE.

It is fully documented in    .  During debugging and development of new features, the current version is used to debug the upcoming version, so there is much testing, even so  bugs are always possible, particularly in new features, such as reporting elements of maps whose keys match a regular expression. Bug reports and suggestions are welcome.

These UDFs have been in regular use for some years.

Because when cDebug was developed, maps were a use at your own risk feature, there are two streams of cDebug:

The only difference between the two streams is that map-reporting code is commented out in cDebug no maps.au3 .

These functions are documented in cDebug.pdf 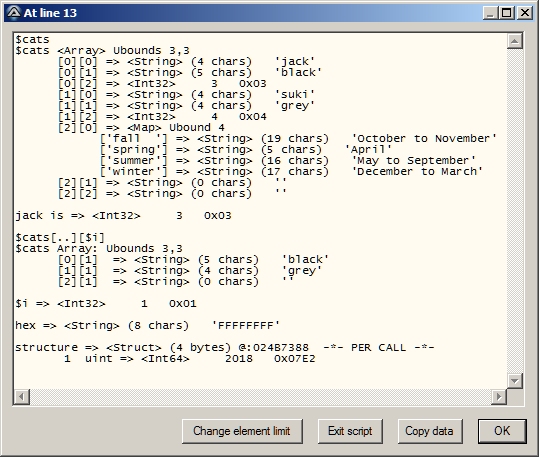 You may only provide a review once you have downloaded the file.

There are no reviews to display.